If you have playing around with React for a while, and you start to planning a production web app, you may need to considering about the performance and SEO for your web app. And that problem can be solved by server-side rendering. Even there are many different approach to achieve better performance on client-side rendering, it might not be a good solution for low-powered devices such as an old phone.

What's make it so fast?

On the client-side rendering, also known as single page app, A typical response sent by the server when requesting a React site will look something like this:

After fetching this response, our browser need to fetch the bundled javascript code which in this case is /app.js. Then, the browser will render our React components to the DOM. So the performance will depends on your internet connection and CPU power. See? This approach takes a lot of times even until the users can see the actual page looks like.

On the other hand, server-side rendering use the server to render our React components. That's what makes it faster than the single page app. So the users can immediately see the page content, even before the browser gets the bundled javascript.

Unfortunately, server-side rendering comes with one big problem. It's very hard to configure from scratch. Also, you need to make sure that your javascript code could run by the server and the browser, and that's not a good story. For example, you can't use localStorage directly to your app, instead, you need to check whether it's run on the browser or server. But if you really want to spend much time and effort to get better performance and SEO, it might be a good choice.

I have prepared the boilerplate of this project. You can clone it, or you can follow along this tutorial step by step if you want.

Clone the repository on github, and go into that folder. Run npm install. Then you will see something like this.

If you familiar with create-react-app, The folder structure is almost the same. Everything inside src folder is our main React code. The index.js in the root folder is the server code which we jump into later.

React need Babel to compile modern javascript language into es2015 which is compatible to almost all browser in the world. We will use env and react presets since we're using es6 and jsx. So, let's start by adding .babelrc file.

Webpack is a javascript build tool to bundle all assets in our app. In this case, we will use it to bundle our client side code. By default, webpack will looking at webpack.config.js, so let's make one.

The entry indicates which module webpack should use to begin building. The output of the bundled code will be stored in the dist folder inside the root folder in the file called client.js. This code be executed by the browser.

By default, webpack only understands JavaScript and JSON files. Because we are using the Babel to transpile our javascript code. we need to add loaders configurations which is defined in webpack configuration file. In this case we're using babel-loader since we're using Babel.

We have Babel & Webpack ready, now it's time to write our first server-rendered React component. Let's add app.js and index.js inside src folder.

If you familiar with create-react-app, Usually we have index.js which will render our React components. But server-side rendering is a little bit different. Instead of rendering our app, now we're hydrating our app. And why is that?

We're almost there! the last thing we need to do to make this app work is by adding the server code. Add server.js inside the root folder.

In our server, we have two different routes. The first one is for serving the bundled client-side code. The second one is for serving our app. As you see, the app route return an html string which is populated by our rendered React components.

Before we start to run our app, we need to configure our npm scripts to make our life easier. Edit your package.json:

Second, run our app by running:

Then, open your browser and go to http://localhost:3000, You will see something like this: 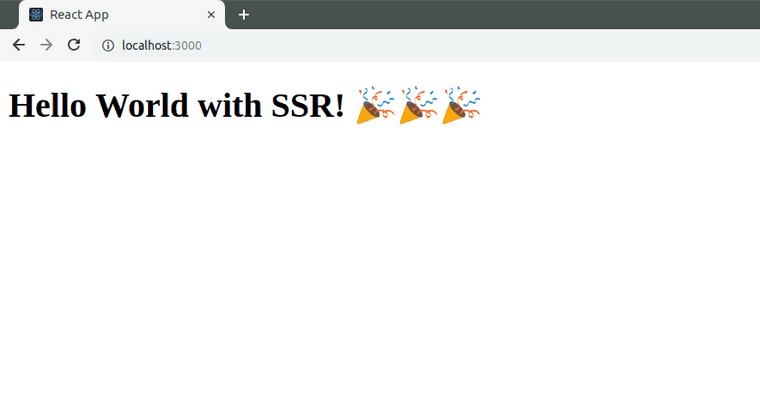 Server-side rendering is a good technology for those who really need SEO and good performance. But, if you are building a dashboard app or anything that doesn't need to appear in google search. SPA is a good option for you 😊✌️.

I'm a software engineer specialized in iOS and full-stack web development. If you have a project in mind, feel free to contact me and start the conversation.